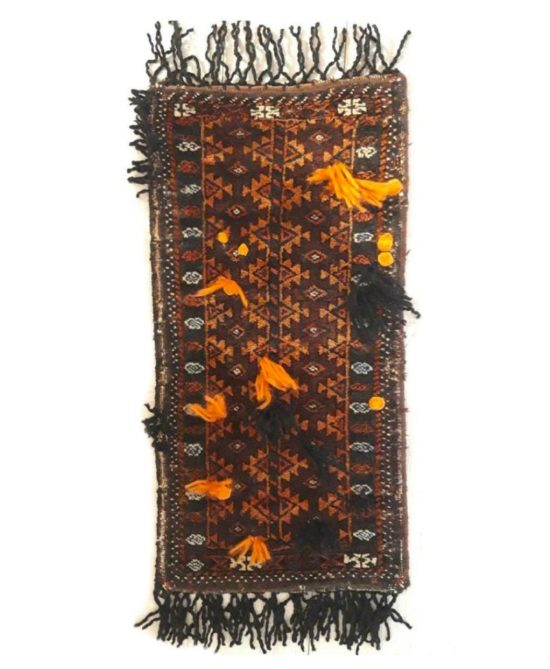 Persian baluch of old manufacture on which the artist has intervened with wool inserts in relief.

Susanna Cati, in addition to the theme collections, designs carpets for spaces and private customers who want a “piece” absolutely customized, both for the measures and the technique used.

(…) Colonel Bharucha continues as if he had never been interrupted. – Do you think it was easy to get accepted in another country? Certainly not! – thunder. (…)

– Our predecessors and their wives waited four days, not knowing what their fate would be. Then in the end the Great Vizir appeared on the deck of the ship with a cup full to the brim with milk -. Look carefully at our faces.

Some heads nod, evidently they know.

– It was a kind message from the Indian Prince, who wanted to say, ‘No, you’re not welcome. My land is populous and rich and we don’t want foreigners with different religions and customs coming to upset our harmony! He thought we wanted to be missionaries. Do you want to know what the Zoroastrians have done? God bless them! – (…)

Colonel Bharucha, once again giving himself the answer, continues: – Our predecessors dissolved a teaspoon of sugar in the milk and sent it back to him. The Prince understood the meaning. The refugees would melt in his land like sugar in milk…and with their seriousness and industriousness they would make the life of his subjects sweeter.

‘The division of the heart’ |  Bapsi Sidhwa

Rug in wool and cotton “My forest”

Rug in wool and cotton “Tangerine”

Rug in wool and viscosa “Lalibela”